Let’s talk about a few things.  I’ve been having a bit of a depression backslide lately.  There was a thing that happened, it was incredibly difficult to handle, and I haven’t really quite recovered yet.  So I haven’t been posting, as you are all well aware.  I’m sad about that, and I hope you are, too!  So I’ve made a few decisions that will, hopefully (finger’s crossed) help keep things moving a little more regularly on the blog as well as giving me enough time to continue to heal mentally.

Decision one: I think this blog is about to become very recipe-heavy!  I think there are some of you who are clapping and some who are booing, but all in all, I think this will be a good short-term solution.  I want to be better about posting BotW recipes and focusing on that instead of collaborations or even Thursday Thoughts will help that!  So get ready for one BotW recipe per week.  That’s definitely happening.

Decision two: I’m working on a pretty big (at least emotionally) Thursday Thoughts post.  I’m not sure when it’ll be done, but maybe at the end of the year.  It’s something I think will really help with some of the depression and anxiety I’ve been struggling with recently and hopefully will be worth reading!  So until then, I probably won’t do any other Thursday Thoughts.

Decision three:  In order to be a little more grateful in my life for the things that are going right and well I want to spend the rest of the year adding (maybe not every week, mind you) recipes from bloggers who have been supportive and inspiring and people who have helped shaped my life.  These will all be non-Zelda recipes and will showcase their favoriate/family recipes or recipes that have serious importance in my development as a person.  Hopefully you enjoy this season a little more because of these and we can all feel a little more appreciation for the wonderful people in our lives!

And now, without further ado, on to the first of two Thanksgiving (at least here in the U.S) recipes: pumpkin pie.

We start, as we did with the apple pie, with a pie crust.  For the real details check out my Apple Pie recipe.  For those of you who stick with me let’s shorten this up (see what I did there?).  Cut in the butter, add a tiny bit of cold water, mix, add more, etc… until you get the perfect, just-held-together texture.  Once we’re there simply wrap and refrigerate for about 15 minutes.

Now for the insides.  The very easy insides.

Measure out the pumpkin, sugar, cinnamon, nutmeg, allspice, and cloves into a bowl.  Mix and stir until combined.  Add two eggs.  Now, you can either beat the eggs before you add them or do as I do and add the eggs, lightly beat them on top of the pumpkin mixture, and then mix everything all together.  I’m all about shortcuts here.

Once everything is mixed and homogenous add the cream and stir until combined.  It’ll look pale and a little fluffy.

Take the pie crust out of the fridge, lightly flour a surface, and roll the crust out into a round shape large enough to cover the pie tin and hopefully less than 1/4 inch thick.  Thick crust makes for weird pie, so thinner can definitely be better.  Using the coolest technique ever, gently roll the crust onto your rolling pin and unroll it into the ungreased pie tin.  It’ll make you look really awesome so be sure to do it while other people are looking.  If they aren’t make sure you cough loudly or sneeze to get their attention. 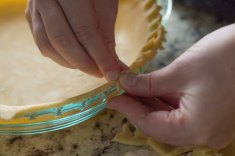 Gently press the crust into the tin, folding the crust over itself to patch any holes.  You can do the next step one of two ways: either cut the excess crust and then crimp it into a pretty shape OR crimp it and then cut off the excess.  Either way is fine, just make sure if you choose the first option you leave enough to crimp.

Add the filling until it fills the crust at least 3/4 of the way.  It’ll rise a little as it bakes, but not too much.  We don’t want it over-full or you’ll get horrible burned stuff all over your oven.  And we don’t want it under-filled or you’ll get too much crust on top… Like mine…  Do as I say, grasshopper, not as I do…  Now bake for about 55-65 minutes.  The key is that the filling turns a lovely shade of darker brown and has a crack in the top.  If there’s no crack it may not be done.  If you’re unsure give the pie a bit of a wobble.  If it moves a lot, it’s not done.  If it’s a little more stiff it’s probably ready!

Remove, make some whipped cream by adding sugar to cream that you are currently whipping, and serve! 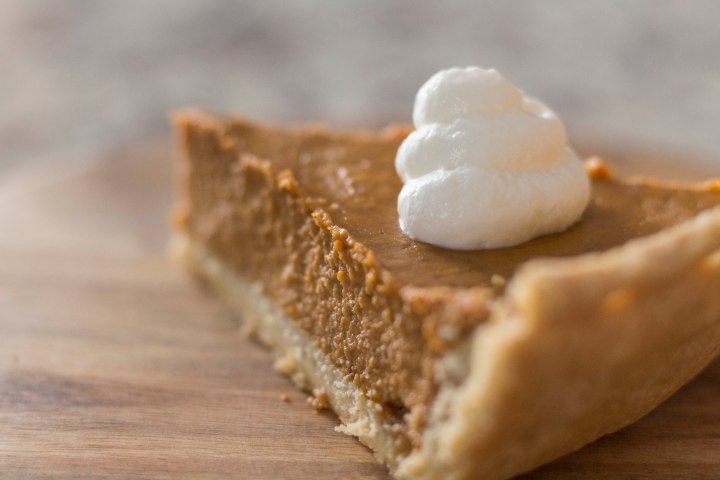 My oven is, yet again, broken. I think the repair guys either installed the part wrong or the new part was faulty. Either way I’m out of an oven until Monday. So that, coupled with how blazing hot it’s getting around here, means I’m working on the perfect ice cream base recipe! Trial 1 had many flaws, including accidentally over-churning 🙄. Over-churning ice cream is one of the worst mistakes you can make - it basically starts turning your ice cream into butter. Next time will be much better!
There is still work to do
#blackouttuesday - if you choose to participate please DON’T use the hashtag Black Lives Matter for this post. It will gum up the Black Lives Matter feed with black screenshots.
Chocolate cupcake success!!! Finally, after 5 trials and 7 recipe iterations I have my perfect chocolate cupcake. Light, fluffy, and rich, perfect for eating with your hands instead of a fork, and shown here with raspberry buttercream. I’ve also included my chocolate Swiss meringue buttercream recipe for @calicoreid (since I forgot to include it with my chocolate buttercream post). Enjoy and let me know how it turns out, okay?!