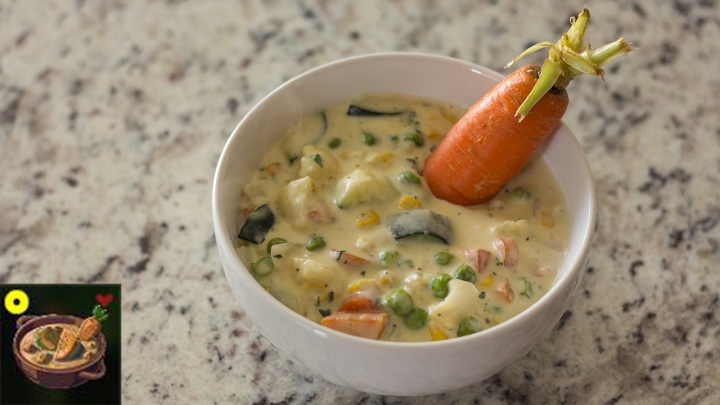 I’m back!  But this time I’m not just attempting to be back because I’ve made a goal/new year resolution to get back into this.  I’ve never really been a resolutions kind of girl.  I’ve always had the opinion that if you have a goal then start now, don’t wait for the new year and risk losing momentum before you’ve even started!  But this year (mostly because of timing, partly because of my intense need to organize everything perfectly to fit in time grids) I’ve decided to start my very own set of resolutions.

One of my best friends from high school started making goals in sets of 4 and I think it’s incredibly clever to do it this way!  It gives you enough to make changes in every aspect of your life, but not so much that you give up.  They are goals in mental (i.e. knowledge), spiritual, physical, and social health.  So what are my goals, you ask?  They are:

Mental/Wisdom: Master all the Tartine and Tartine No. 3 bread recipes

Spiritual: Actually, I don’t really want to share this here, as it’s pretty personal and would take a very long time to explain.  But suffice it to say that I have one!

Physical: The proverbial “Get Healthy”, but I actually have a plan for how to do this, so it’s not just a plea in the dark

And last but not least, Social, the reason I’m boring you with all of this: My goal is to improve my blog and my community here by being more regular in recipes, in the quality of my work, and being committed to the schedule I’m about to propose.  They always say you’re more apt to accomplish goals if you tell people what they are so this is me requesting that you hold me accountable!  The new sort-of-schedule is going to be:

A new recipe each week

One “Thankful” recipe per month

And, potentially, if I’m able to keep all those other posts regular, one collaboration per quarter.

Yeah, it doesn’t seem like a lot, but it’s a schedule I think I can stick to and a schedule I feel comfortable making a commitment to.  Also, there will be an element of surprise to it all, since I’m not specifying posting days this time!  Let’s see if that works and if it does maybe I’ll go back to specific days…  So hopefully you guys can help me stick this goal through and I hope this will produce a better blog for you to give your limited time to and a better chance for me to be a part of your community!

And now, after all that, your recipe. 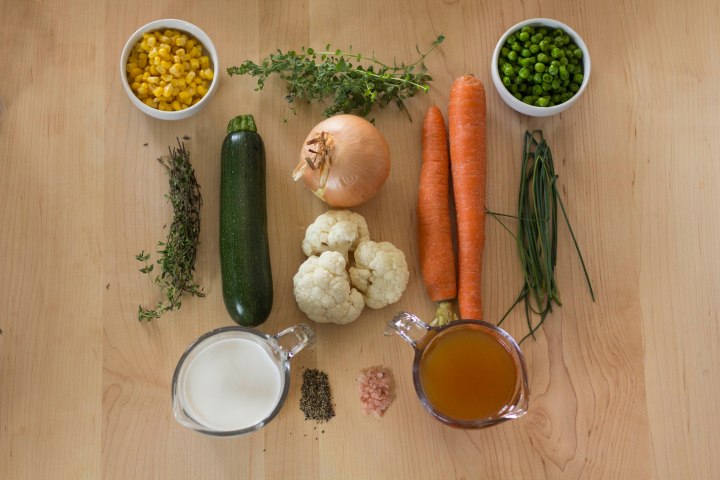 Lets start with stripping the herbs and cutting up all the veggies.  When you’re using fresh herbs they need to be taken off the stems.  This can seem incredibly daunting but i promise, it’s actually not that bad.  If you’re using dried herbs, just skip this step and move on!  Start by washing (obviously) and shaking dry the herbs as much as you can.  Place the edge of your knife against the herb stem below the leaves, tight, but not cutting through.  Once you’re in place simply pull the stem and drag the leaves along the blade of the knife.  Don’t move the knife, just the stem.  The leaves will strip off and the stem will pull through!  Easy peasy!  Any more questions, just watch this video:

Next, we cut the vegetables.  Just slice and dice them into bite-size chunks, larger or smaller depending on your preferences.  I prefer large chunks.  I feel like you get a better flavor from them! 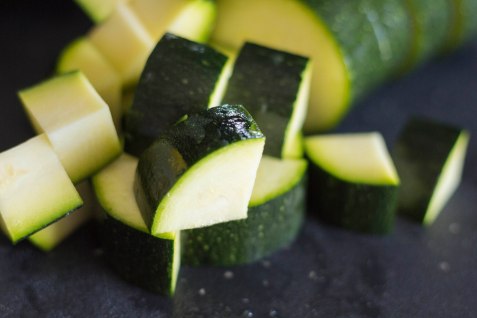 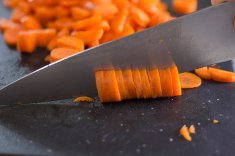 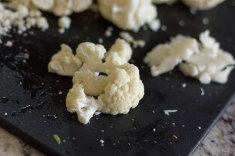 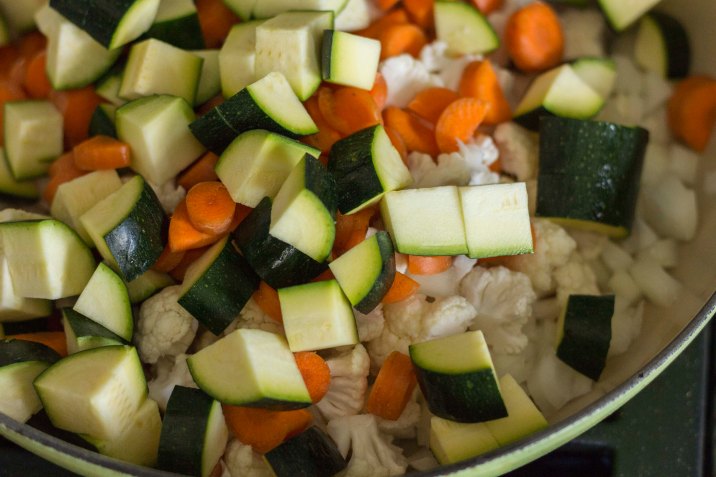 Once everything is prepped add a tiny bit of butter (or oil) to a pan with some height.  We are going to be simmering in it later, so we want to make sure there’s enough room for the liquid.  Start by frying the onion until it’s tender and opaque.  Then add all the fresh veggies and saute for about a minute or two, just until they are all shiny.  And guys, I know my photos have the zucchini added at this step.  My advice, don’t follow the photos!  While it was easy, it made the zucchini a little overcooked, which is not what we’re going for.  We’ll add it later.  Promise. 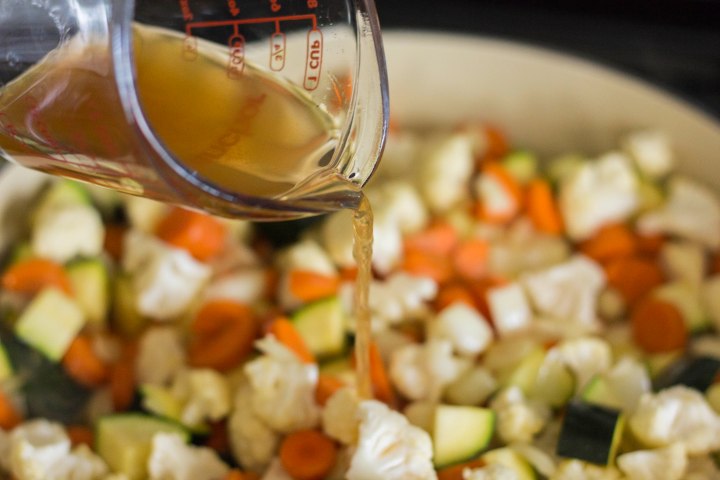 Once everything is nice and shiny add the vegetable broth and simmer for about 15 minutes.  We want everything nice and tender before we add it to the sauce!  If you’re using fresh peas and corn (because it’s summer or you’re very lucky) go ahead and add them to the simmering veggies.  If not, I used frozen peas and canned corn.   I like the taste of canned corn better in soup, but you can use frozen if you prefer.  While your fresh veggies are simmering just heat up the peas and corn.  Make sure all the water is drained and set them aside for later.

Next, we make a roux.  We talked about the pitfalls of making a roux when we made Fish Pie, so I won’t go over them in detail again.  Let’s just do the basics. 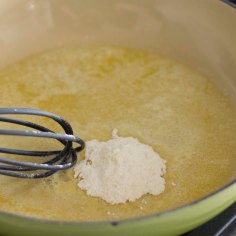 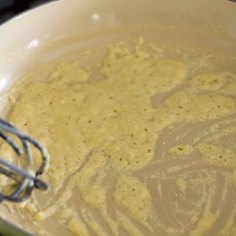 Melt your butter in a heavy-bottomed saucepan over medium heat.  Wait until the butter is completely melted and bubbly.  Once it is, whisk in half the flour.  Once all the flour is incorporated and the mixture starts to melt and become a bit liquidy again add the remaining flour.  Whisk is continually until it starts to melt again.  Whisk constantly for 2 minutes until your roux reaches the blond stage. 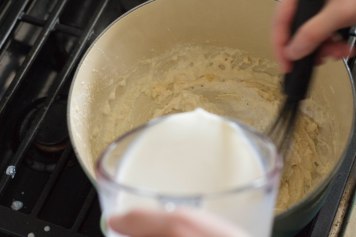 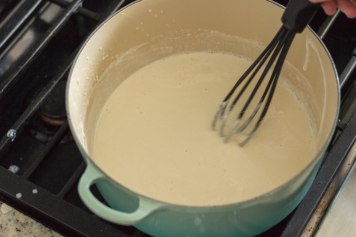 Once your roux is ready we start slowly adding the milk.  Add about half the milk at a time.  The roux may ball up on itself when you do but just keep whisking and it’ll sort itself out!  Whisk until the mixture is homogeneous and slightly thick.  Add the remaining milk and repeat.  If the mixture is too thick you may have added too much flour.  Add regular milk until it reaches a gravy-like consistency. 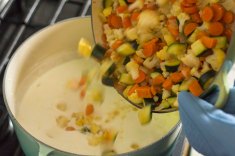 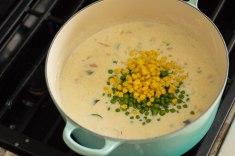 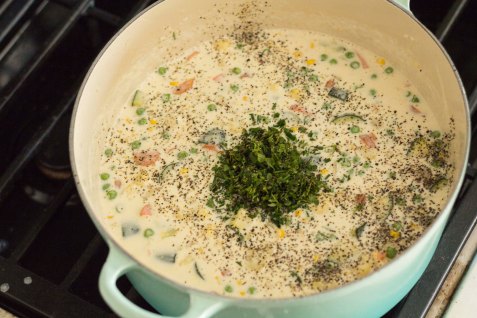 Once your sauce is ready simply add all the veggies (including the zucchini, peas, and corn at this point!), herbs, and remaining broth to the sauce, stir until well combined, and let it simmer for 10-15 minutes to allow the flavors and spices to combine!  If you skip this part the herbs won’t have done their job and it’ll be a bit bland.  Be patient.  It’ll be worth it! 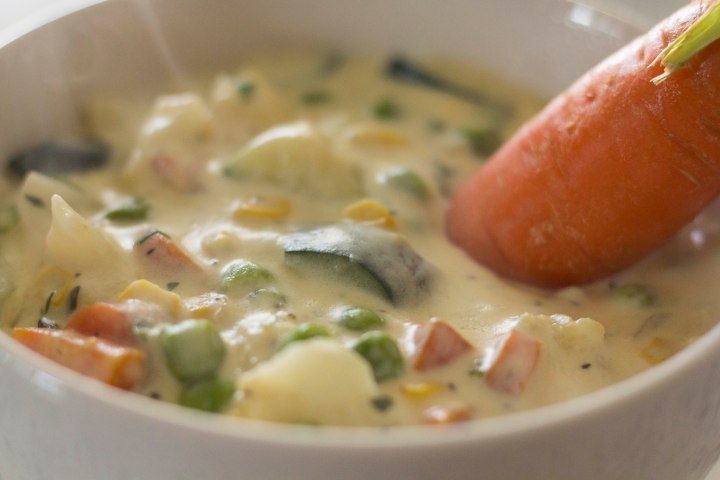 P.S. I don’t recommend adding a raw carrot at the end… The price we pay for matching photos, right?

Vegetables in a thick, creamy soup