Alright, guys, I think I’m about to throw you for a loop.  After checking recipes, matching BotW photos, and deciding on what I want to make, I’m making a change up to my recipes.  Now, I have a Veggie Cream Soup already made.  But the BotW photo is much more orange, the Cream of Vegetable Soup is more creamy, and I wanted to make cheese soup.  Because, quite frankly, I don’t love Cream of X soup.  I utilize it in other recipes to make other things, but I never actually just eat Cream of X soup.  So I’m renaming my last veggie soup Cream of Vegetable soup, after all, it’s veggies, cream, and soup.  And the new and improved Veggie Cream Soup, is about to follow!

Basically, folks, we are making cheese soup.  And while I have photos one way, I’d really like you all, please, to follow what I say, not what I show!  It’ll make sense when I start describing what’s going on.

Start by chopping all the veggies up into lovely bite-size pieces.  Carrots, broccoli, and cauliflower can go into a bowl together, but keep the onions separate.  When everything is diced heat a heavy-bottom pot (or, I guess, any pot) and add all the butter but 3 tablespoons.  Add the onion and saute for 1 minute.  Then add the other veggies and saute for 2-3 minutes, until shiny and starting to soften.

Here’s that part where you get to ignore what I’ve done and pay attention to what I say!  I have you add the extra butter and flour to the sauteed veggies, but the roux really struggled to come together, and without a solid roux, the likelihood that your cheese will break is pretty high.  And, for me, I can handle that, but I don’t want that for you people at all!

So now we’re just going to remove the veggies and put them in a bowl.  Then, add the 3 tablespoons of butter, melt it down, add the flour slowly, and make a nice roux by whisking continuously.  I have photos from the old Veggie Cream Soup…  Pretend like they’re from this recipe.

Add the milk 1 cup at a time and whisk until completely mixed.  This’ll thicken the milk.  Continue with the remaining milk.  Then add the cream and chicken or vegetable stock (your choice to make this vegetarian!) and stir in the veggies, salt, and pepper.  We don’t add a lot of salt because the cheese is salty, so don’t be tempted to add more.  It’ll feel bland at this step. 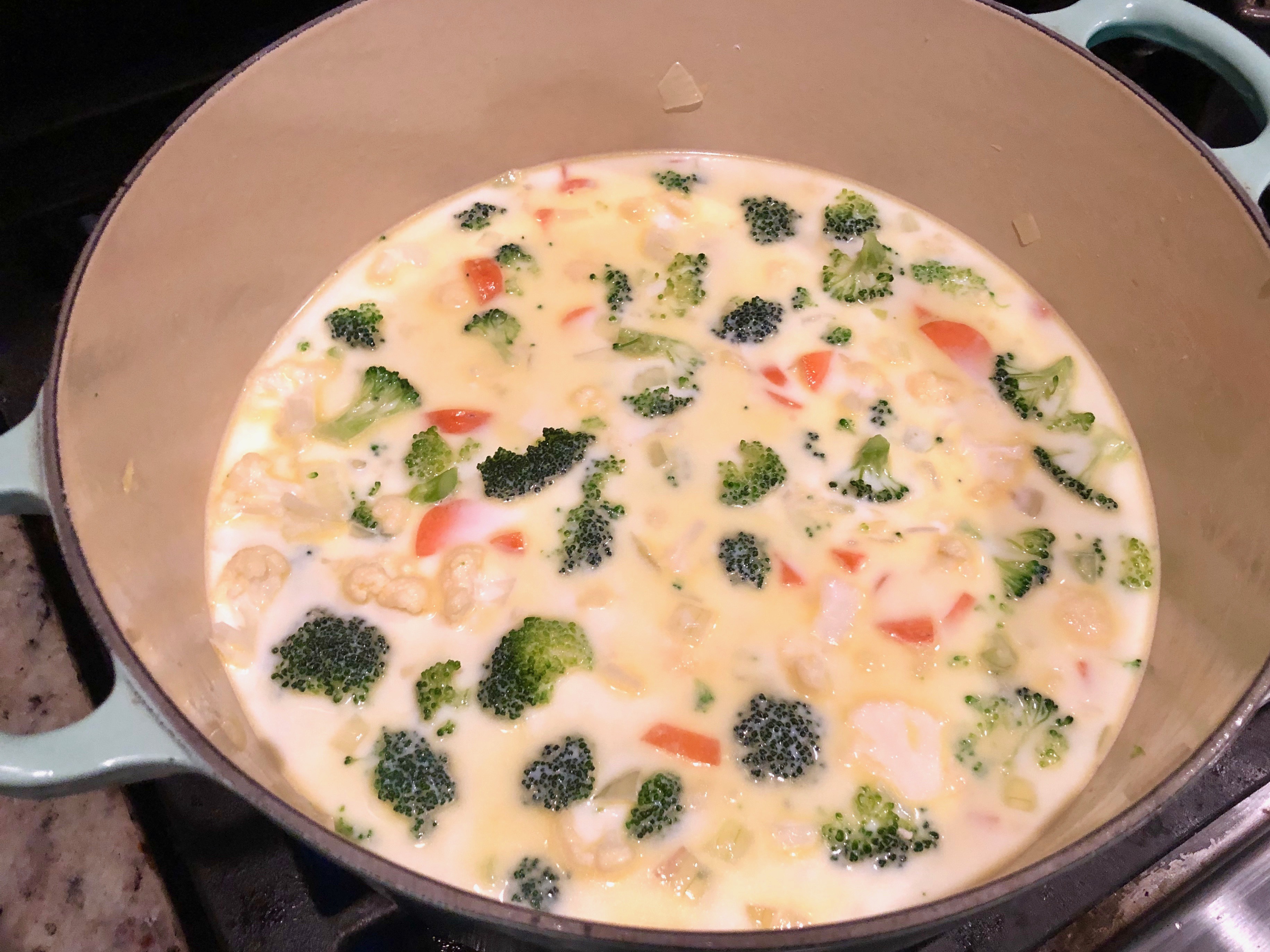 Here’s the next step, and it’s an important one for winding up with a nice, smooth soup instead of a cheesy broken mess.  Don’t let the soup boil.  It should simmer, barely bubbling, to cook the veggies, but it shouldn’t boil.  Keep an eye on it.  If it boils you may not get a great soup. 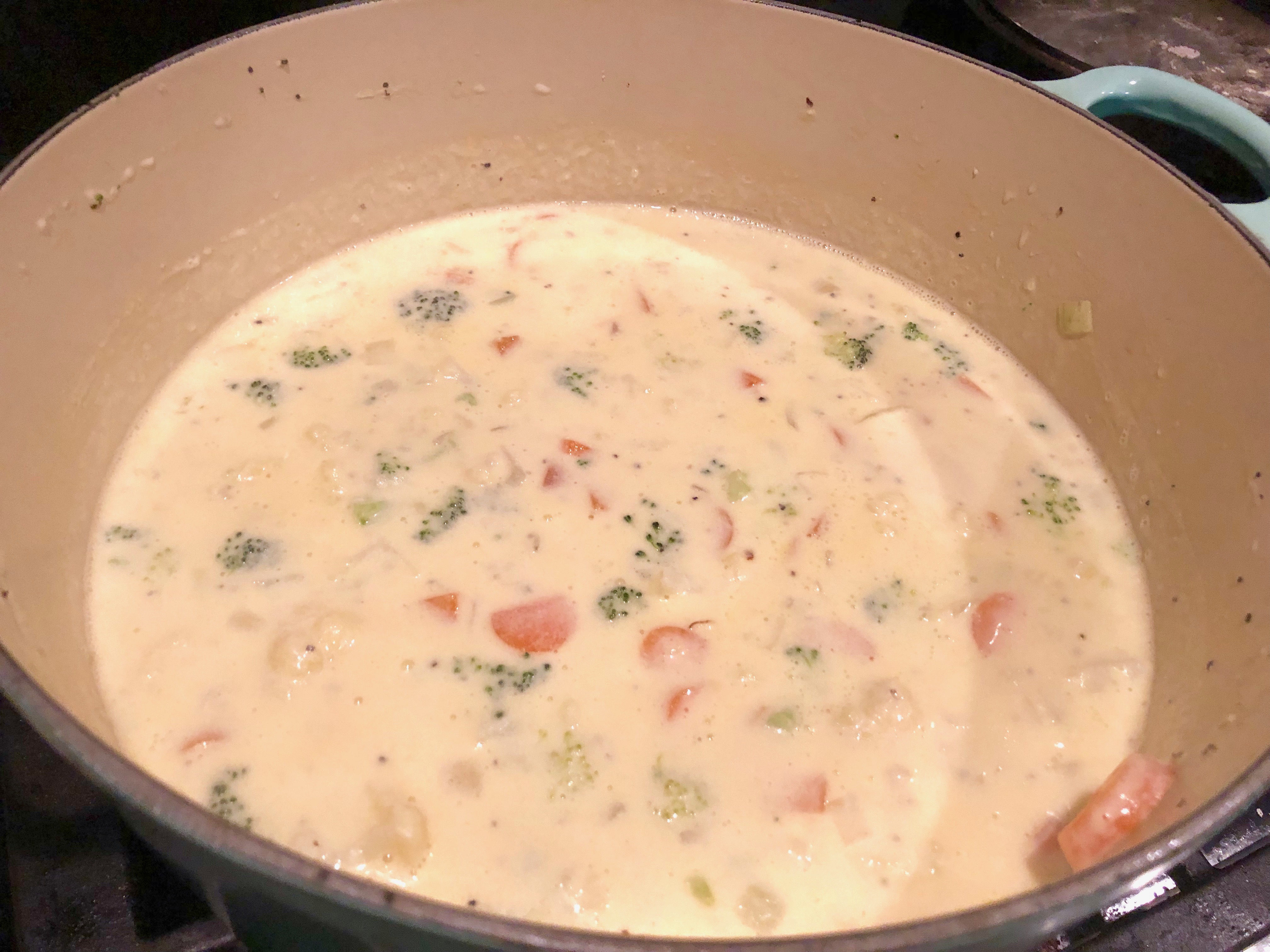 Simmer it for 10ish minutes, or until the veggies are tender and delicious!  Then remove from the heat and let it sit for a few minutes until it cools slightly.  This is like adding chocolate to cream – if you do it while it’s too hot the fat will break out and won’t be able to reform properly, so you end up with a mess.  Cheese into hot things is the same.  So once it’s cooled slightly, add the cheese, 1 cup at a time, and stir until smooth and creamy.  And then eat it all while you can – you won’t really feel like stopping!

A creamy cheese soup with broccoli, cauliflower, and carrots.